The much Awaited day for the Indian Navy finally dawned on 16th November when a mammoth 44,500-tonne warship was commissioned into the Indian Navy at the Sevmash Shipyard severodvinsk Russia at a handing over ceremony attended by Defence Minister A K Antony, Russian Deputy Prime Minister Dmitry Rogozin and senior government and naval officials of the two countries.
The induction brings the curtains down on a 13-year saga of carrier reconstruction marred by recurrent time slippages, cost overruns and edgy political negotiations.On Saturday morning, the dignitaries were given a ceremonial Guard of Honour by Indian and Russian naval personnel. The Russian flag on the modernised vessel was lowered. Soon after Captain (Commodore) Suraj Berry, Vikramaditya’s commanding officer, read out the commissioning order, the Indian tricolour was hoisted on the vessel with a 34-men colour guard led by Lieutenant Commander H. Mehta in attendance. The naval band rendered the national anthem. The commissioning papers were signed by deputy director of Russia's arms exporter Rosoboronexport, Igor Sevastyanov and the ship's Commissioning captain Suraj Berry.
The initial $1.5 billion contract for retrofitting the carrier and buying 16 MiG-29K fighters was signed in 2004. Later, India agreed to a price escalation and has finally ended up paying over $2.33 billion.INS Vikramaditya will be escorted to India during a nearly two-month voyage by a group of warships to secure a safe sail to its new base at Karwar on the Arabian Sea coast next to Goa. 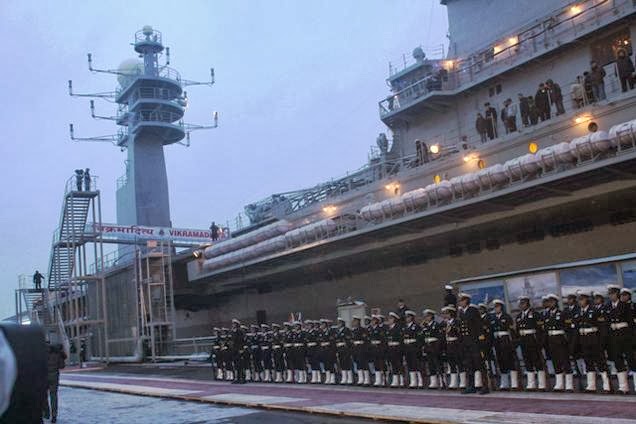 Such was the hype that NATO forces were reported snooping on the Ship even before being inducted. Track the events here.
Posted by Richlyn at 11:45 AM 2 comments: