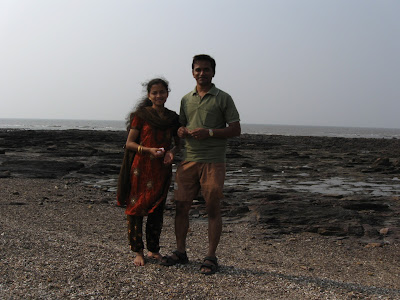 After the Hectic preparations for the Wedding day (as per the East Indian Wedding traditions) the relatives, neighbors and people who helped in the preparations gather together the second day and have fun with the newly wedded couple. So when my brother-in-law came home (his in-law's house) the ladies stopped the couple outside the house and did not let them enter until their purses were lighter. On Wednesday the entire troupe  went to the Island off the Gorai beach aboard a fishing trawler. Lunch was prepared aboard the trawler and served on the island itself. After lunch we took a ride in the choppy sea for half an hour and returned ashore.More Pictures
Posted by Richlyn at 9:06 AM No comments: 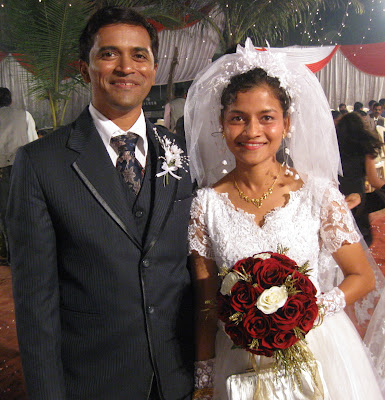 more pictures
A girl dreams about her wedding
-that blissfully special day.
So much excitement and anxiety
Over what to do and say.

You've found your perfect man
Who loves and cherishes you.
Your loving vows unite your souls,
Creating one heart shared by two.

Marriage is a promise to compromise
No matter how great or small.
Though life is never perfect,
True love surpasses all.

Give freely and unconditionally.
Enjoy a life filled with mutual caring.
I wish you a wonderful marriage
With sweet joys that make life endearing.

From this day forward, may you honour your oath,
I wish everlasting happiness to you both.

Here's to the groom with bride so fair, And here's to the bride with groom so rare!
Posted by Richlyn at 2:10 PM No comments:

Its been almost a year since the AT&T process ramped down in EDS and 3 years since i joined the company. Ever since we (those in AT&T) came out of our enclosure, we tried to get in to better roles that what we were doing in the process. Some of us got a early breakthrough- like Pradnya and Harish, others subsequently also moved a notch above the rest. I applied for quite a few IJP's and got grounded by the second round (apparently i did not have the right assets). Then came the ultimate position, I applied for it and exactly 3 months later (i had almost given up) on December 13th an email declared that i was selected for the post of a scheduler. Oh what a feeling... i thank Jesus for this! The WFM cabin was on my mind ever since but i guess i got the best of it. Its been worth the wait. Now i will be seeing only columns, rows and the chemistry between them!
Posted by Richlyn at 4:51 PM No comments: 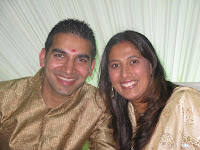 Prakash's brother Prajesh married his long time girlfriend Althea on 22nd November. I was unable to attend the Church nuptials at Bhavnagar due to some last minute situation (damn it >:-< ). So i decided to meet them on Sunday December 12th and make up when they arrived at B'bay after their whirlwind marriage tour spanning days and the length of the country. Prajesh was to depart for London the same day and hence i tailed Prakash,Anjali, Althea and Joan to see him off at the CSIA airport. Althea shed a few tears while we tried to make a fool of ourselves waving from across the waiting room glass. Later we had Dinner and i hurried home to avoid being locked out in the cold.:)

Congratulations and have a blessed married life!!
@ unni: Hope you had a uneventful trip and were not stranded due to closed airports in the snow. And hey thanks for the sexy Eaton radio, you made my day!
Posted by Richlyn at 5:23 PM No comments: