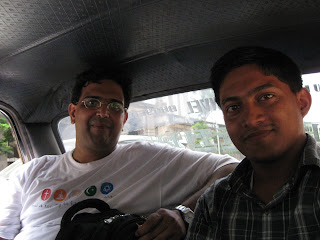 Me and My pal Amol decided to go shopping on Monday. We decided to go to town as I had to buy shoes from Grant Road,town has been a place which rejuvenates me and just walking around Fort’s architectural buildings browsing for books and surfing PYT’s is a different experience altogether. Amol would be meeting me at Churchgate directly so I boarded the 10:05 CCG F local from BVI. Amol called while I was nearing my destination to say that he would be a bit late so I alighted at Marine lines and went to the Marine Drive to take a few pics and then proceeded to CCG. Amol arrived by 11:50 throwing his weight around! We took the subway across the station and went towards the Fountain. I met Amol In EDS, he’s a  guy with eclectic hobbies, reading anything and everything,cooking(he had a short career stint as a Chef ),collecting and watching movies which include old(really old) English and Japanese. We spent 6 hours finding Amol’s XL clothes at different places right from CST to Colaba. I enjoyed the walk from Regal to Electric House- such a awesome ambience, what a view, wow! After completing his shopping we were too tired to walk so we hailed a taxi to Grant road to buy my shoes and then later at around 1830 hrs I took a return train to CCG and back to BVI.

Posted by Richlyn at 6:33 AM No comments: